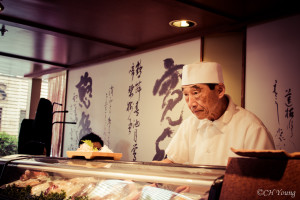 If you’ve seen the documentary Jiro Dreams of Sushi and you live in Seattle, then you probably know Shiro’s Sushi Restaurant. If you haven’t seen it, then you would probably wonder why there is a line of people waiting outside an hour before opening at this non-descript sushi restaurant in Belltown. First of all, if you haven’t seen the film you absolutely should. It doesn’t matter if you like sushi or not because, as Craig stated, it’s about “love and life, beauty and discipline. Sushi just happens to be the vehicle through which we share our Jiro’s journey.” Jiro is an eighty-five year old master sushi chef, perhaps the best in the world. He owns Sukiyabashi Jiro, a Michelin three-star restaurant that is located in a Tokyo subway station and has only ten highly coveted seats that are nearly impossible to get.

Shiro Kashiba trained with Jiro and is himself considered a master sushi chef and one of the best. He’s been a Seattle resident for well over forty years and has had a variety of dining ventures, but he opened his current namesake restaurant in 1994. I don’t know if there were lines to get in before the documentary, but it is certainly a destination now. At seventy-one years old, Shiro works just three nights a week. One of those was a recent Friday when, for my birthday dinner, Craig and I dutifully lined up forty-five minutes prior to opening and breathed a sigh of relief when we realized we’d get two of the eleven seats at the sushi bar. 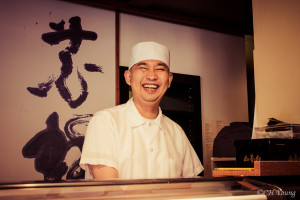 Daisuke Nasazawa with his infectious smile

We were escorted inside when they opened at 5:30pm sharp, and the entire restaurant quickly filled up including all the tables. We took our seats at the sushi bar and saw Shiro as he was greeting his guests, along with another familiar face. Daisuke Nasazawa has recently come to Seattle from Tokyo after spending eleven years as an apprentice with Jiro. He is featured in the film and will be best remembered as the apprentice who spent months making tamago, or grilled egg, only to be told time and time again that it wasn’t good enough. Finally, after hundreds of attempts, he finally earns Jiro’s approval, which brings him to tears. At just thirty-four years old, he’s being trained to be Shiro’s successor one day.

To our disappointment, we weren’t going to be served by either Shiro or Daisuke the night we visited. We were served by a third sushi chef. The set-up is that Shiro serves seven patrons at the bar, and Daisuke and our chef serve two bar patrons each as well as the diners at the tables. We were still in the presence of all the chefs, but naturally we were hoping Shiro would be making our sushi. Still, it was marvelous. I’m not an expert, but the sushi was simply-but-eloquently prepared and beautifully presented. Shiro’s serves traditional sushi; there is no wasabi on the tables, and while there is soy sauce available you are discouraged from using it. Everything the chefs feel you need for flavor is already incorporated into the sushi. But these are not contemporary rolls that so many sushi-eaters have become accustomed to. There is no cream cheese and no avocado. This is simply the freshest fish on exceptionally delicious rice. Occasionally there is a bit of wasabi or lemon, but the aim is purity, simplicity, and flavor.

We ordered omakase, which means “I’ll leave it to you.” As a diner, all you need to do is let the chef when you’re about eighty percent full so they can finish out the arc of the meal. The highlights for me were the salmon two-ways (one with citrus, one with sea salt); scallop; Spanish mackerel (a fish we discovered and loved while we were in Barcelona); and Kumamoto oysters. They prepared live spot prawns; first we had the body and then the head. I’ve never had a prawn head before but have been curious about it, and while it is definitely a bit disconcerting I thought it was incredibly delicious. We also got to try geoduck, or longneck clam, for the first time. If you’ve ever seen geoduck, you know it is exceptionally unattractive, even for a clam; but it is a Pacific Northwest specialty and I was hoping we’d get to try it. At this point, the verdict is still out. I didn’t dislike it, but I wouldn’t go out of my way to order it again. I did, however, confirm that I really don’t care for uni, or sea urchin, and am disappointed in myself for saying that. It seems like a refined palate should like uni. The homemade pickled herring and herring roe with kelp were also not my favorites, but with more than twenty different pieces of sushi that someone else is selecting for you, you’re bound to not love every bite. Part of the fun for me is to try new things even if you don’t care for them, and I always discover something I do like that becomes a new favorite.

So what about those grilled eggs? I’d never had tamago before. I never really understood why there was such a thing as sushi with egg and I just assumed it was filler, or for people that don’t like fish. I should have known better. It was served as our last piece of sushi, as dessert, as tamago has sugar in it, which gives it its very subtle sweetness. I don’t know what it might taste like in less capable hands, but I felt like I “got it” after trying it at Shiro’s. I wanted to ask Daisuke if he had made the tamago, but I didn’t know if that would be appropriate or embarrassing, but it was delicious and something I would go out of my way to order if I’m fortunate enough to return.

My recommendation, no matter where in the world you live, is to watch Jiro Dreams of Sushi. It’s beautiful, inspiring, and fascinating. And then, if you live in Seattle, get in line early, sit at the counter and order omakase. You will not be disappointed. Of course, Craig and I are now dreaming of Jiro and trying to plot how we can be two of the lucky ten diners a night who get the honor of eating in his tiny, humble subway station restaurant to enjoy the finest sushi in the world.

Previous: The Price of Greed
Next: Profiles – Seattle Academy of Arts and Sciences Zambia Club

Follow us
This error message is only visible to WordPress admins


Error: Access Token for kimpluscraig is not valid or has expired. Feed will not update.