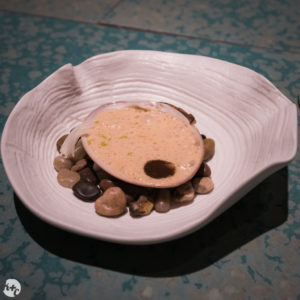 Disfrutar – which means “to enjoy” in Catalan – is co-owned by Mateu Casanas, Oriol Castro, and Eduard Xaturch. The three were Ferran Adria’s right-hand men at elBulli, a restaurant considered the best in the world before it closed in 2011. These are the guys who created the dishes, cooked the dishes, and taught others to prepare the dishes. They have the most intimate knowledge of the restaurant after Adria himself. And so it was with much excitement that we had the opportunity to try their new venture in a beautifully designed space in the Eixample neighborhood. The restaurant received its first Michelin star in 2015, just one year after opening, and in 2016 was named Best New Restaurant in Europe and ranked number 38 of all European restaurants. Adria has said that he considers Oriol Castro to be one of the top five chefs in the world. We don’t know who he thinks the other four are although we can only assume he is counting himself in that number which would not be unfounded. Either way, it is high praise indeed.

Disfrutar has two seatings a night, and those of us at the later 9:00pm seating began to gather at the front of the restaurant. When our tables were ready we were led party by party through the restaurant, which is separated into two rooms by an open kitchen in the middle. We received a quick introduction to the chefs and were encouraged to get up, walk around the kitchen, and take photos whenever we felt like it. In reality, this seemed more challenging than they made it sound, simply because of all the activity in the restaurant, but we appreciated the invitation. This meal came several days before we dined at Pakta, but the openness exhibited at Disfrutar compared to Pakta was very much appreciated.

We were seated in the larger back dining room, which managed to be light-filled and bright even in the dark of a winter night. The whole space was modern, fun, and casual – exactly how I like my fine dining experiences. The restaurant only serves a tasting menu, but there are four choices: a large and larger “classic” menu, and a large and larger “festival” menu. Since it was our first time dining at Disfrutar, our waiter recommended the classic menu so we would be able to try some of the more famous dishes; dishes which have become classics, even though the restaurant has only been open for two years. We also decided to go with the larger tasting menu which, in retrospect, was a bit too much food, but when one has an opportunity like this it’s not the time to start skimping.

From the beginning we were served dishes that were beautiful, surprising, delicious, and made us smile.

“The beet that comes out of the land” (Disfrutar)

“The beet that comes out of the land” was served in a glass bowl of what looks like black soil but is actually black rice. A skilled shake of the bowl by our server suddenly revealed two beet meringues ready to be plucked out of the ground. At the same time, we were served another glass bowl filled with faux soil, but sitting on top were three bright red rose petals. One had what tasted like a lychee but looked like a white raspberry on it; the other two had a “pearl” of gin that we were instructed to lick off the petal to ensure we get the rose flavor in our cocktail. These are the sort of fun and creative dishes that make me absolutely giddy. They are unexpected, challenging, and thoughtful; and they taste good.

Several dishes followed along with a variety of interesting wine pairings, and then came the macaroni carbonara prepared tableside. This is one of those classic dishes, and we had already witnessed the exciting prep at the neighboring table but now it was our turn. Pasta Carbonara may not sound exotic and, honestly, it didn’t taste so different from what you might expect, except maybe richer and more decadent, but nothing is ever as it seems here, including the ingredients. The macaroni is actually made of transparent sheets of gelatin with cubes of bacon. The carbonara is a foam piped into the dish with fresh parmesan cheese, lots of it, is grated on top and all mixed together. It makes for a very theatrical presentation.

These chefs, like the their mentor Ferran Adria, focus on getting to the essence of a flavor – something they achieve by taking an ingredient and deconstructing it, reimagining it, and putting it back together in a new form. The most classic example from elBulli – which Disfrutar serves a variation of – is the spherified olives, where the re-imagined olive tastes more like an olive than an actual olive. And so it goes with the Pasta Carbonara, or “the beet that came out of the land.” The dishes alter your perception; it is like magic and the concept of misdirection.

Another important aspect is to engage all of the senses in order to enhance the taste. Cold hare consommé is served in a brandy snifter over an ice cube with fresh tarragon and orange peel, but before imbibing Armagnac essence was sprayed onto our hands so we could smell the smoky liquor while drinking the gamey “juice.”

After a couple of more savory courses we were on to sweets, which included a berry cheesecake coronet, chocolate “peppers” with olive oil and bread – another reminder that things are not what always they seem – and for the finale a chocolate mint cotton candy that guests pick off a branch resembling a cotton wood tree.

By the time we were finished I thought Disfrutar would be our best meal in Barcelona, but for overall best experience it was outdone by our meal at Spoonik. I discovered Spoonik on TripAdvisor, which I don’t always trust as a single source of information. The reviews were incredible, but I kept looking for back-up from other sources. Aside from just a couple of articles I could find in English, there just wasn’t much information. I decided to give it a chance anyways, and am so glad I did.

Spoonik is helmed by chefs Jon Giraldo and Jaime Lieberman, from Colombia and Mexico respectively.  They both landed in Catalonia, where they worked and trained at several well-established and renowned restaurants, originally opening Spoonik together as a dinner party concept at their home. The chefs developed a reputation for creative Latin-American inspired dishes with corresponding light, sound, and imagery to engage the senses – a common theme in Barcelona fine dining that they have taken to another level.

Spoonik is currently serving their unique experience in a storefront restaurant in the Gracia neighborhood. There are two seatings a night and we chose the later 9:30pm seating. They have everyone wait outside until the appointed time, which builds up the anticipation. Once you are inside, your coat is taken and in its place you are handed a glass of cava and a refreshing palate cleanser. The night we were there, Jon checked off our names from the exclusive list – there are only about thirty seats – and we were led to our table. The restaurant holds several tables that seat between six-to-eight people, with guests are grouped together presumably by language. Even though the restaurant is no longer located in a home, the dinner party theme is intact and guests are encouraged to interact. The evening starts out leisurely. Table-by-table, we all eventually get a tour of the kitchen, an introduction to the chefs, and a culinary tease of three amuse-bouches, with specific details and instructions on how to eat them as preparation for the rest of the meal. Honestly, of the three bites, two were okay and one was phenomenal, so I wasn’t sure what direction the meal would take, but everyone was so friendly and the mood was so festive that I remained optimistic.

I decided not to take notes during dinner so I could just relax and enjoy the experience, but there was no printed menu so I can’t describe everything we ate other than it was really creative and delicious.  Dishes were Latin-inspired, with lots of corn and fish and fun. There was the flower seed that literally electrified your mouth, which has to be one of the most surprising, giggle-inducing gastronomic experiences I’ve ever had. Everything tasted great and there wasn’t anything uncomfortable or overly intellectual, yet it still was unexpected –like the corn-based dish you licked out of a vessel that resembled a dental mold complete with gold tooth. The main courses – which I often find the least interesting in a tasting menu format – were composed of kitchen basics chicken and fish, but they really shined here. There was the theatrical making of liquid nitrogen ice cream, complete with a laser light show. Music and sounds accompanied each course, as well as tabletop video graphics that, while not perfectly executed, still get an “A” for effort. 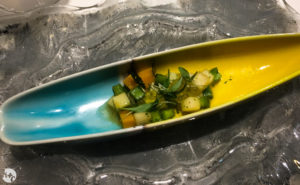 The service couldn’t have been better. Led by the two chefs and a host of others, they were charming, funny, and led the convivial spirit of the evening. Everything was designed to help guests feel relaxed and have fun. The menu was the perfect length and the pacing was terrific. There were actual pauses in-between courses, and they were welcome. Note to restaurants that have tasting menus: it’s okay to not have food on the table occasionally; it gives customers a chance to breathe, to contemplate what they’ve experienced so far, to enjoy the atmosphere, and to look forward to the next dish. And unlike another restaurant we went to, we could use the restroom anytime we wanted without asking.

The evening was theatrical, fun, and still very genuine. There was no pretention, it just felt like two very talented chefs really trying to create a unique experience where there are no barriers and everyone is participating as a whole. When we left after almost four hours, we thanked the chefs for the experience and promised we’d be back, and we definitely will. Spoonik will be the first reservation I make on our next trip to Barcelona.